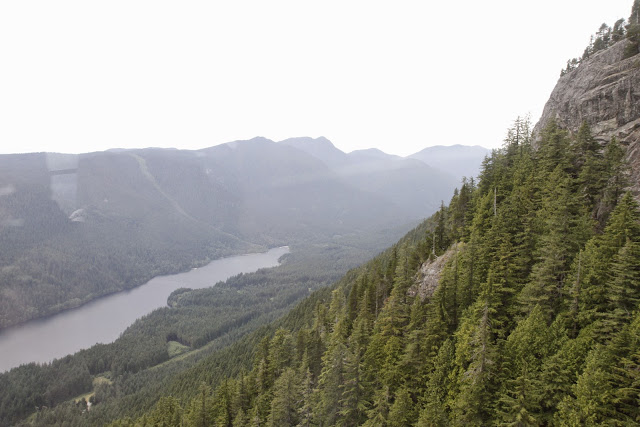 On my list of things to do while in Canada was an extraordinary experience with bears. The girls at reception at the Best Western where we were staying suggested a visit to Grouse Mountain.  It overlooks Vancouver and during the winter the slopes are occupied by skiers ride  the Red Skyride from the base to the mountain top and then the chair lifts  to ski its slopes. In Summer, tourists and adventurers travel to the top to experience the Theatre in the Skye, the Alpine Plaza , Guided Eco Walks, helicopter rides and the Disc Golf Course. 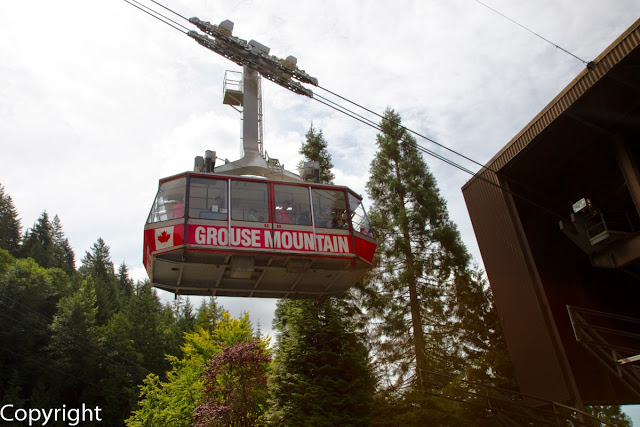 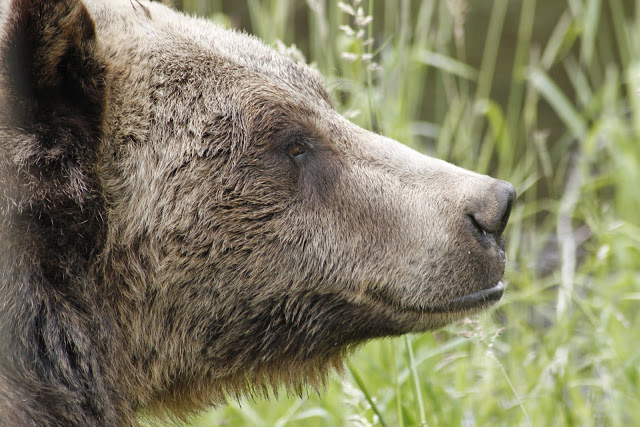 Our bus trip took us through Stanley Park, which was then put on our list of things to do. Across Lions Gate Bridge to North Vancouver. At the base of the mountain we all pack in to ride the Red Skyride.  We travel through giant forest trees, with a magnificent view over Vancouver and surrounding mountains, islands and waterways. 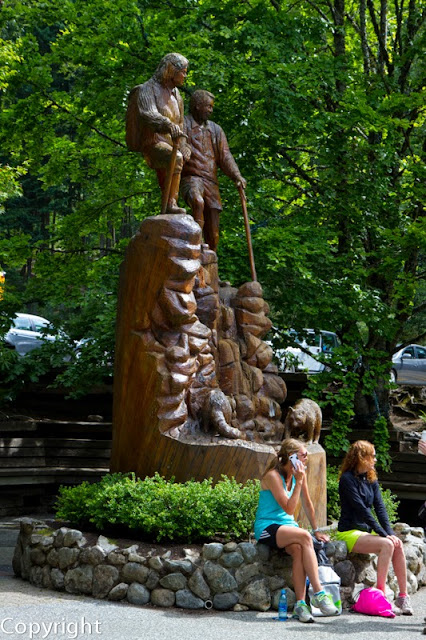 Upon arrival, we are just in time to get a good seat to watch the Lumberjack Show.  The MC and the two axemen are so good at entertaining us, that you have to stop and appreciate their skill, with their axes, which are  razor sharp and they climb their way up upright logs, about 2.5 metres off the ground, as they cut notches into the side at intervals, insert planks into the notches, so they can stand as they chop.  Of course it is a race between the two and they have already divided the audience into teams to urge them on. They then choose, two girls to help them with cross cut  saws to cut logs in half. Again the audience goes wild with the cheering as the competition heats up. 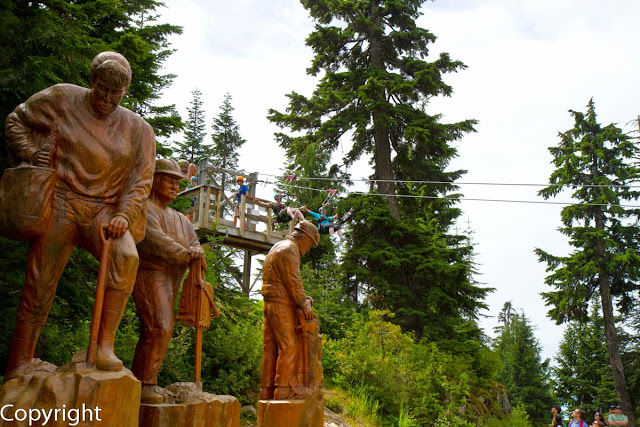 There is never a show without a silly man and he starts by falling over the fence into the arena and is so clever he ends up climbing the thirty foot pole, drops his harness and backpack and after clowning around, pretending to fall, slip and generally give the audience a heart attack, he attaches to the stability rope and slides to the ground. 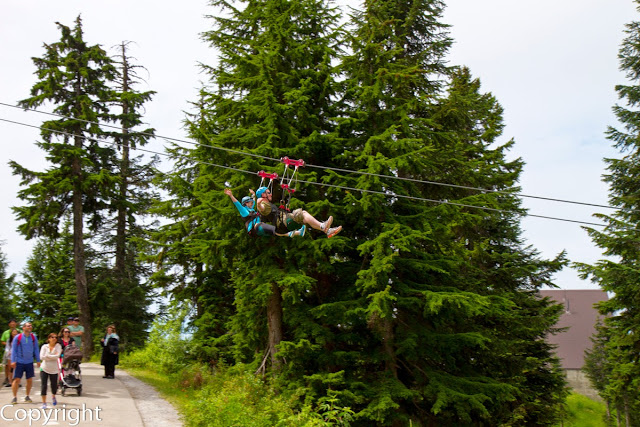 After the Lumber Jack show, it is past our lunch time and we find the Rusty Rail BBQ, it is set on an outdoor balcony and the weather is beautiful and sunny about mid twenty C. and we look forward to a Chicken Burger for myself and an Alpine Burger for Graeme. Both burgers are served with macaroni cheese. 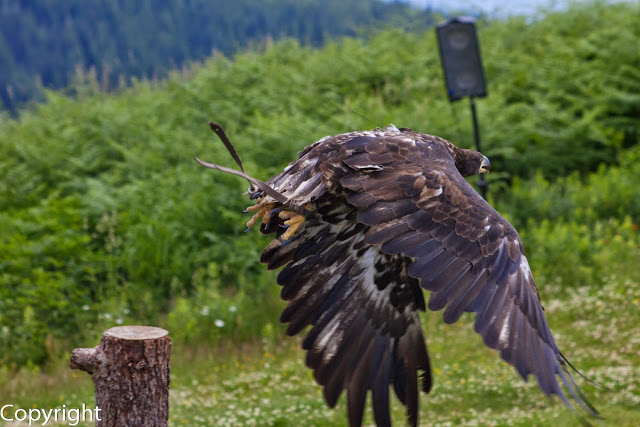 Following lunch we come across the Birds in Motion Demonstration. We are attracted by the cries of the crowd and I am afraid we have missed half the show.  We find an ampitheatre with tiered seating and the crowd is filling in time by performing the Mexican Wave, while waiting for the show to start. 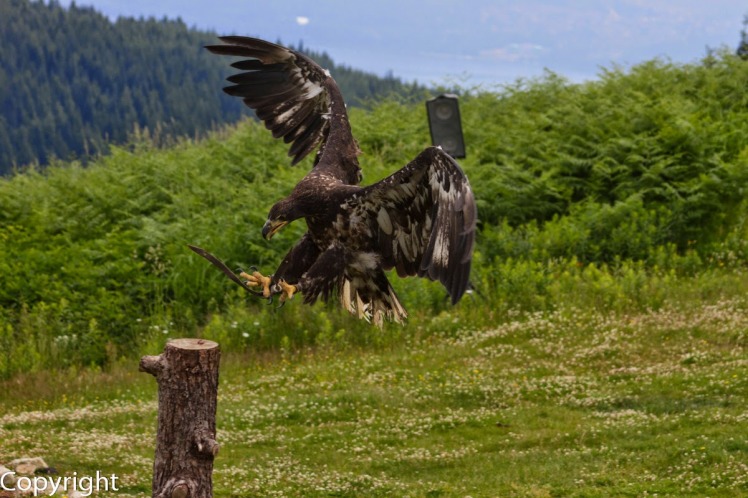 Our first sight of the birds is the Bald Eagle, what a magnificent creature. It has a six metre wing span and will soar high above looking for rodents and rabbits to swoop in and pickup in its huge talens.  The bird today is not very old and is not yet bald.  This will come in time. 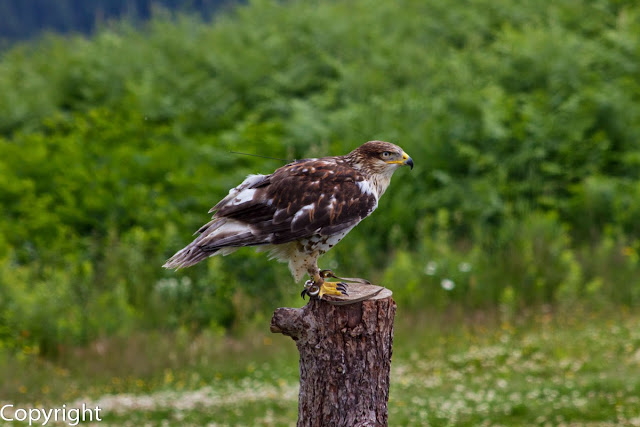 The lady organising the show has been working with the birds for a long time, as she has a good deal of control over the birds and they mostly perform the tasks required.

The next bird is a hawk and he is a little hesitant to fly and hops along the ground following her. To the amusement of the crowd. Eventually he performs and is rewarded with the customary piece of meat. 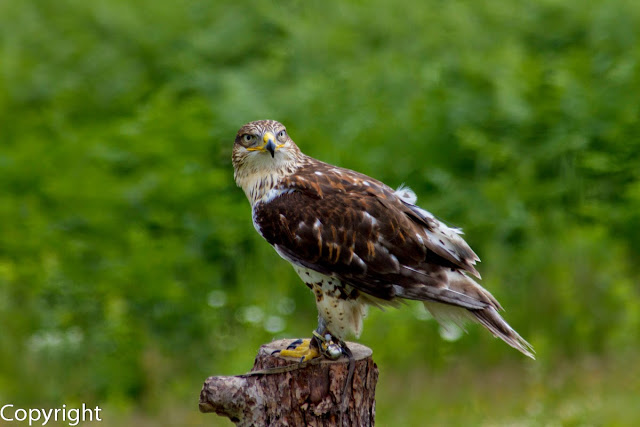 We always think of a vulture as an ugly creature, but the turkey vulture up close, is a magnificent bird, with his red head and strong beak and beautiful black feathers, one can appreciate his magnificence. With pieces of meat as his reward  he flies from one post to the other and onto the handlers glove. 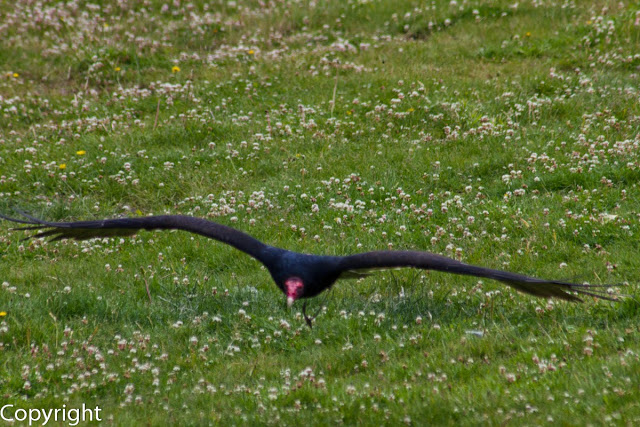 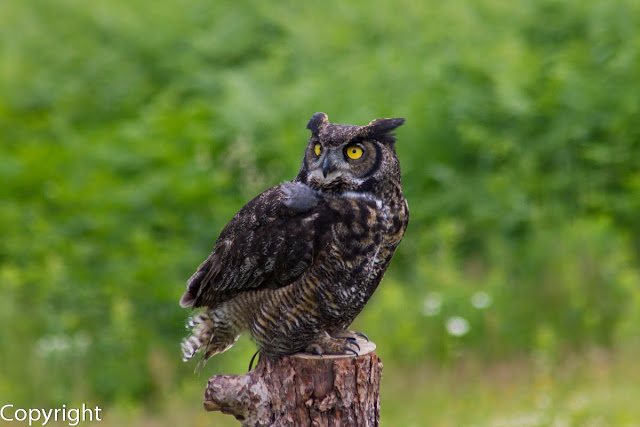 Who couldn’t love a horned owl and the girls next to me, fell in love with him. Even though he was distracted with the kite flyers behind him. With his little horns and huge eyes, flat face  and little squat body, it is easy to appreciate the gentle nature of this little bird. He was only about eight inches tall and spends most of his time awake at night, sleeping during the day. 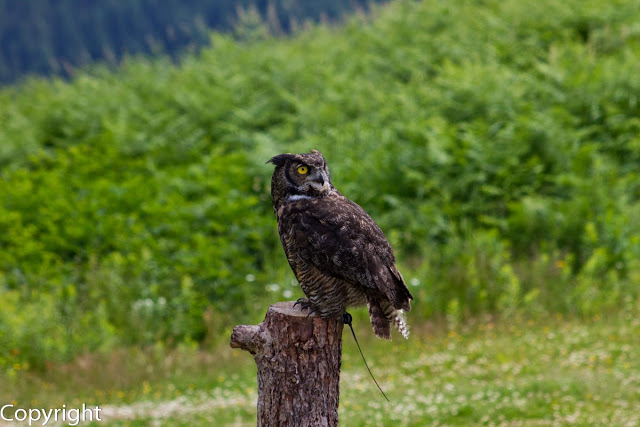 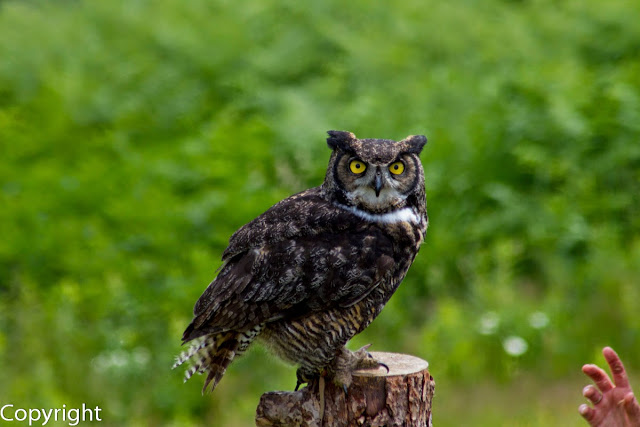 The cheetah is the only animal that is faster than the Peregrine Falcon.  He chases birds for his diet and catches them in the air.  He is only a small bird about eight inches long and a wingspan of about sixteen inches. The handler took a piece of string with a baton attached and swirled it around her head in the air.  The bird had one swoop and missed, but caught the baton on the second attempt and was rewarded with a dead piece of bird. He was so fast, It was extremely difficult to capture him with the camera. 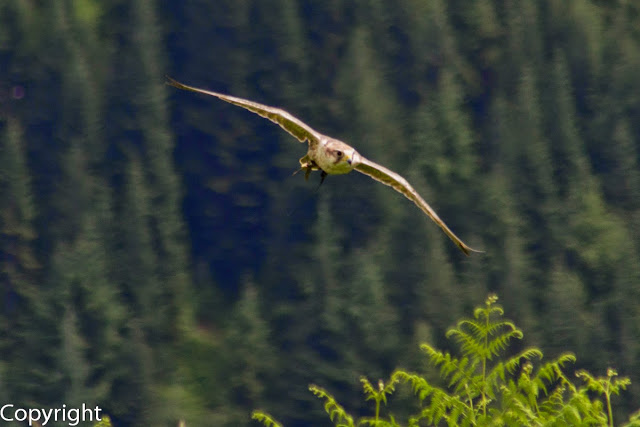 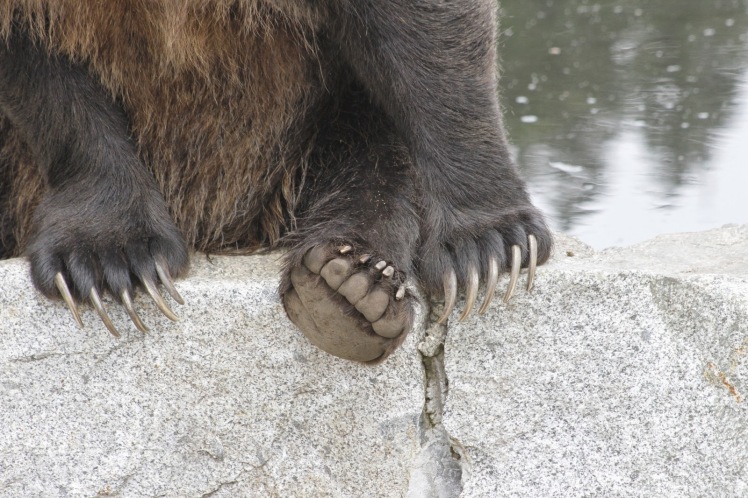 I had to find the bears, it was my main mission for the day. They are two orphans, Grinda and Coola. One is a lot bigger than the other, but that isn’t because he eats more, it is because the bigger one comes from the coast, where the food supply over the ages has been a lot more consistent, hence that particular group of bears have grown bigger. Whereas the smaller one comes from an inland plain, where the food supply was not quite as abundant. They are two different colours, the bigger one was a lighter colour and the smaller one a dark brown. 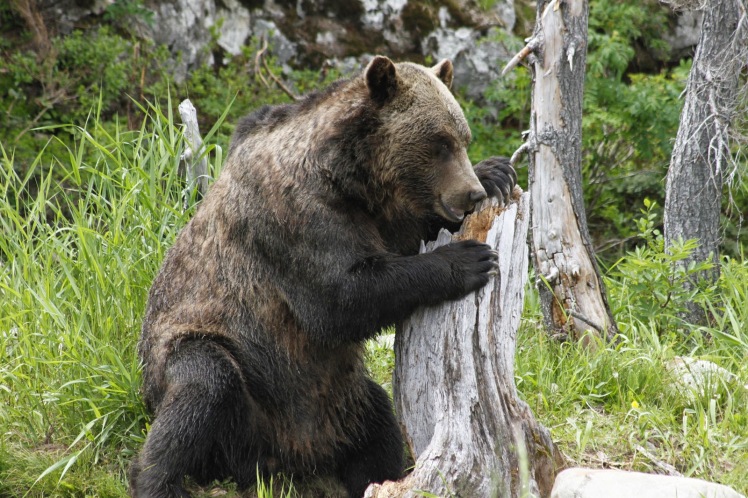 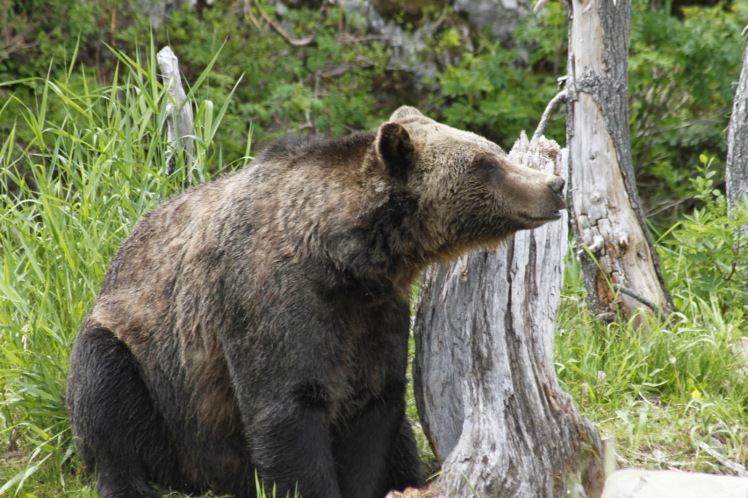 Even though you know that grizzly’s can be killers, they were very gentle and went about their business, of foraging, scratching back the grass, looking for the grubs and insects under the surface. They would amble around, even though they can move quite fast, scratching the bark off the trees and at times I am sure they knew they had an audience.  They seemed to get along quite well together, maybe because there were no females to argue over.

Their compound was five acres and  they were  obviously used to humans.  The commentator was speaking over a microphone and there would have been 100 people following their movements outside their enclosure.

It was an experience well worth the wait and a fantastic travel destination while in Vancouver, Canada